The Dawn of Underwater HVAC Systems

Hydropolis was a creature of its time and place. The time was the mid 2000s and its booming real estate market; the place was Dubai in the United Arab Emirates, a city celebrated for its flashiness and over-excess. Hydropolis was slated to become the world’s first fully underwater hotel, a series of structures that would in total have cost $300 million to construct. Complete with Plexiglass windows that would have allowed visitors to gaze out into the dim waters of the Persian Gulf, as well as coming equipped with 5-star dining and fitness facilities (and an underwater movie theater where that came from), the project has yet to see any development beyond mere blueprints.

But despite its (theoretical) charms, it’s the underwater HVAC system that Hydropolis planned on using that most impresses us here at Fluidtrol. As most of you probably know, the two mainstay types of HVAC system in the world are either heat-operated or electric-operated. Amazingly, Hydropolis would have used neither of these systems for its warming/cooling needs. Utilizing an HVAC system that would conduct seawater into piping, and then condensing it to whichever temperature a hotel guest required, Hydropolis was on the cutting-edge of the promising field of underwater HVAC systems.

Unlike their electric or heat-powered cousins, seawater HVAC systems consist of a cold seawater supply line, a heat exchanger (located at either the shoreline or, in the case of something like Hydropolis, the “seawater intake area”), and a closed cycle water distribution system with all the necessary piping that would allow for hot external air to be exchanged with cool water coming from the ocean depths. Needless to say, with something like ocean water, there would be the need for a galvanic corrosion-resistant series of aquatic strainers that could filter in salt water and still keep other things sea-related safely at bay.

We at Fluidtrol think there’s a huge potential market for our corrosion-resistant strainers in this field. Think that Hydropolis was just a one-time fluke? Think again. As long ago as 2009, the city of Honolulu, HA started a project that would use underwater HVAC systems to cool a large section of its downtown buildings. Groundbreaking for the monumental project was slated for the end of 2012. And just because one underwater hotel fails in Dubai, another one is already in the works: a new lavishly-funded undersea getaway – the Water Discus Hotel – is already being plotted for construction as soon as possible. As the impact of traditional HVAC systems causes further damage to the environment, other resorts and coastal cities around the world are going to start looking into emissions-free ways of ventilating their buildings.

With our state-of-the-art aquatic basket strainers, we’re here to help bring about the changes that are needed. Contact us today! 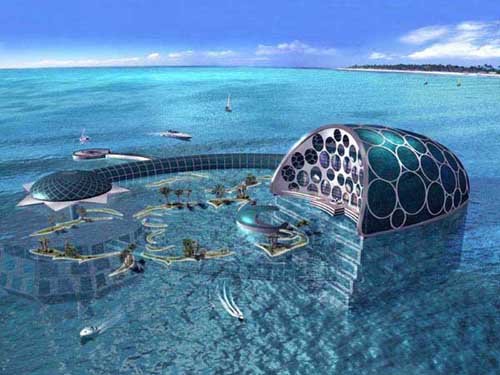